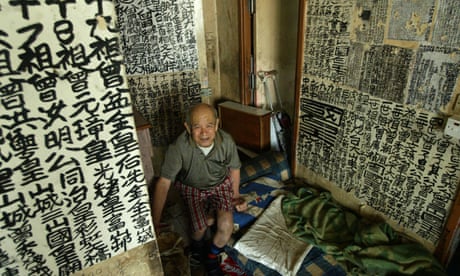 The King of Kowloon: my search for the cult graffiti prophet of Hong Kong

For years Tsang Tsou-choi daubed his eccentric demands around Hong Kong, and the authorities raced to cover them up. But as the city’s protest movements bloomed, his words mysteriously reappeared

The secret message only appeared when the wall was drenched with rain. For weeks, I had been scouring Hong Kong for these misshapen Chinese characters, but the way they materialised out of nowhere was a shock. It was an unremarkable yellow-grey stone wall in the middle of Central, Hong Kong’s political and economic heart. The words were only revealed when the wall had been soaked; in this case after a downpour in July 2015, which left the wall darkened and damp. Suddenly it was possible to see spots where the dove-grey paint had flaked off, revealing traces of Chinese calligraphy. The writing, in clumsy, off-balance characters about 20cm high, was instantly recognisable for its lack of grace, elegance or learning.

I can’t remember the first time I saw characters like these. They were everywhere when I was growing up in Hong Kong in the 1970s and 80s, a feature of our city just as much as the bottle-green snub-nosed Star Ferry and the noisy trams. Their author was a fixture of the landscape as well: a filthy, toothless, often shirtless, rubbish collector with mental health issues. He called himself the King of Kowloon. Hopping on his crutches, with plastic bags swinging from the handles, his crablike, bow-legged silhouette was so distinctive that, if people saw him in the distance, they would cross the road to avoid him. As he passed, parents would shield their kids’ eyes from him and mutter, “Chi-sin a!” Crazy! He even became a playground taunt – “You’re the King of Kowloon!” – levelled at the slow kids, the weird ones, the poor ones, the outcasts.